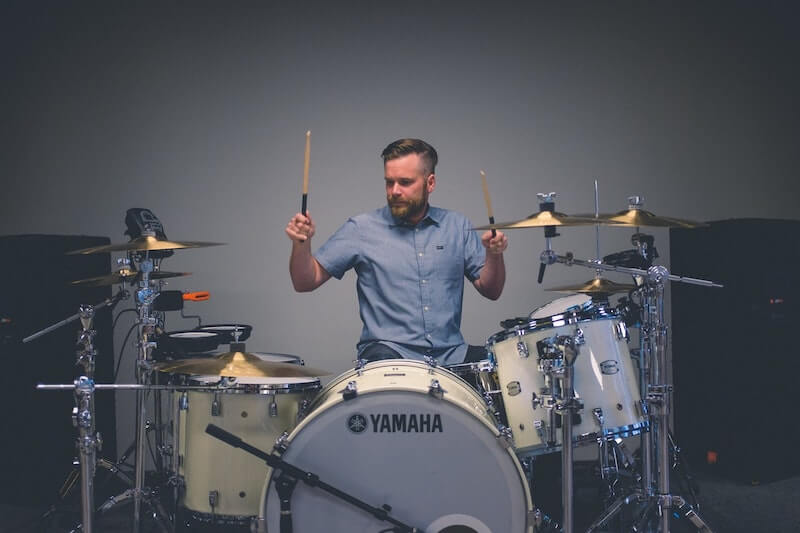 Acoustic drums are the most common type of drums. There are a lot of ways to use them: from rehearsal bases, to concert venues, to studio use for recording. To begin with, let’s look at what a classic drum kit consists of.

The main core is the bass drum and the snare drum. They are the ones that form the so-called groove. And it is them that we have devoted the main attention in this article.

The drums can have different sizes, can differ in timbre. For example, for jazz or other light music you’d better buy drums with a softer, not aggressive sound, as opposed to pop or rock directions. The situation with the sound can depend on the plastics, on their tension, on the feed of the drummer himself. The sound of the bass drum at concerts also depends on the placement of the microphone: outside or inside the drum. Placing the microphone outside will give you a voluminous, rich sound, but you lose clarity, which is hardly suitable for rock music. In that case, you should place the microphone inside the drum so you can hear what’s called a click.

Among the top brands among bass drums are TAMA, YAMAHA, DW. PEARL, MAPEX and others.

The sound of the bass drum is extracted by a special pedal. The bass drum can be one, but sometimes there are two. The effect of two barrels can be achieved with the so-called “gimbal” (double pedal).

The situation is similar with snare drums (popularly called “snare” or “snare”). For people far from it, the snare drum is exactly the explosive, shot-like sound you hear in almost every song played, rhythmically alternating with the bass drum. The explosive sound comes from the design of the drum: the sound pressure inside the body that results from the stick hitting the top plastic is transferred to the bottom plastic, to which a special spring is leaned in the middle, and it is the contact of the plastic with the spring along with the hitting of the top plastic that creates that sound.

Choosing a working drum is a delicate matter. Often professionals have a few different models of snare drums, and at concerts or festivals they create their own, which allows them to achieve a sound close to the studio recording as much as possible.

The sound of a snare drum is recorded with the same microphones as a bass drum. At concerts, they often use one microphone that is located near the top plate. When recording in the studio, it is better to use multiple mics, which will allow for more fine-tuning the sound in the mix during mixing.

The most popular among professionals are drums from brands MAPEX, YAMAHA, TAMA.

You and I have considered the basis of a drum kit. But, musicians say, the foundation is boring to the point of insanity, because it’s just a foundation. To brighten up the mix and make it more harmonious and accentuated we can use a set of volumes (drums with different pitch) and the so-called “iron”.

The number of volumes in a drum kit is unlimited, but the basic set is two volumes with a higher tone (violas) and a floor big volume (“flor-tom”).

A Few Ways to Make Your Electronic Drum Kit Quieter

Emotions in the Recording Studio: The Right Mindset for Vocal Recording